Melbourne’s Marvel Stadium (formerly Etihad Stadium) in the heart of Docklands precinct is just a 15-minute walk from Waterfront Melbourne Apartments. Stay with us when visiting Melbourne, especially when attending one of the many events held at this multi-purpose sports and entertainment stadium. It is the only football stadium in the Southern Hemisphere with a fully retractable roof which ensures that all events are able to proceed in perfect conditions, no matter what the weather conditions. The roof, can open or close in eight minutes.

On completion in 2000 it was originally called Colonial Stadium (2000-2002); followed by Telstra Dome (2002-2009) Etihad Stadium (2009-2018). Currently renamed in September 2018 Marvel Stadium after the venue owners (AFL) agreed to an 8-year sponsorship with Walt Disney Company Australia. Marvel Stadium is one of the world’s most recognised brands and a “powerhouse” of the entertainment industry. Sport fans are the big winners from the multimillion-dollar investment at Marvel Stadium, making the venue the most technologically advanced and connected stadium in Australia.

The stadium with a capacity of 53,359 has become the world’s busiest multi-purpose stadium and is right here on our doorstep. The stadium has welcomed more than 35 million fans through the gates since opening in 2000.
Whether it’s basketball, soccer, cricket, football or a concert you are interested in Marvel Stadium has it all…it’s the home to all major sporting and entertainment events. Make sure you take time to take an affordable 1 hour ‘behind the scenes’ tour of Marvel Stadium, Monday – Friday. You will see the players change rooms, coaches’ briefing rooms, coaches’ box and you can even experience the feel of walking up the AFL umpires’ tunnel. Visit the media room, which also doubles as the AFL Tribunal.
See the Marvel Vault, a dedicated Marvel retail store located on Level 1 at Gate 2 within the Stadium…the only one of its kind in Australia!! Accessible to the general public on both event and non-event days, the Marvel Vault offers a range of Marvel merchandise, from apparel, accessories, collectables and lifestyle & on-trend items.

If it’s food & beverages that you after, then Marvel Stadium offers a large range of catering options from high quality quick service items such as hot pies, fish & chips and hamburgers on game days or visit one of the many café options open to the public during the week. Marvel is also the home to ‘The Food Truck Park’ offering a variety of food options & craft beers during events.

Before setting off to experience all Marvel Stadium has to offer, download the free Marvel Stadium App from the App store or Google Play. Marvel Stadium offers free WIFI.
Waterfront Melbourne Apartments, the perfect place to stay in Melbourne on the banks of the Yarra River in a fully furnished 1, 2 or 3-bedroom apartment. When checking-in, just ask us for directions to our super Marvel Stadium right on our doorstep!! 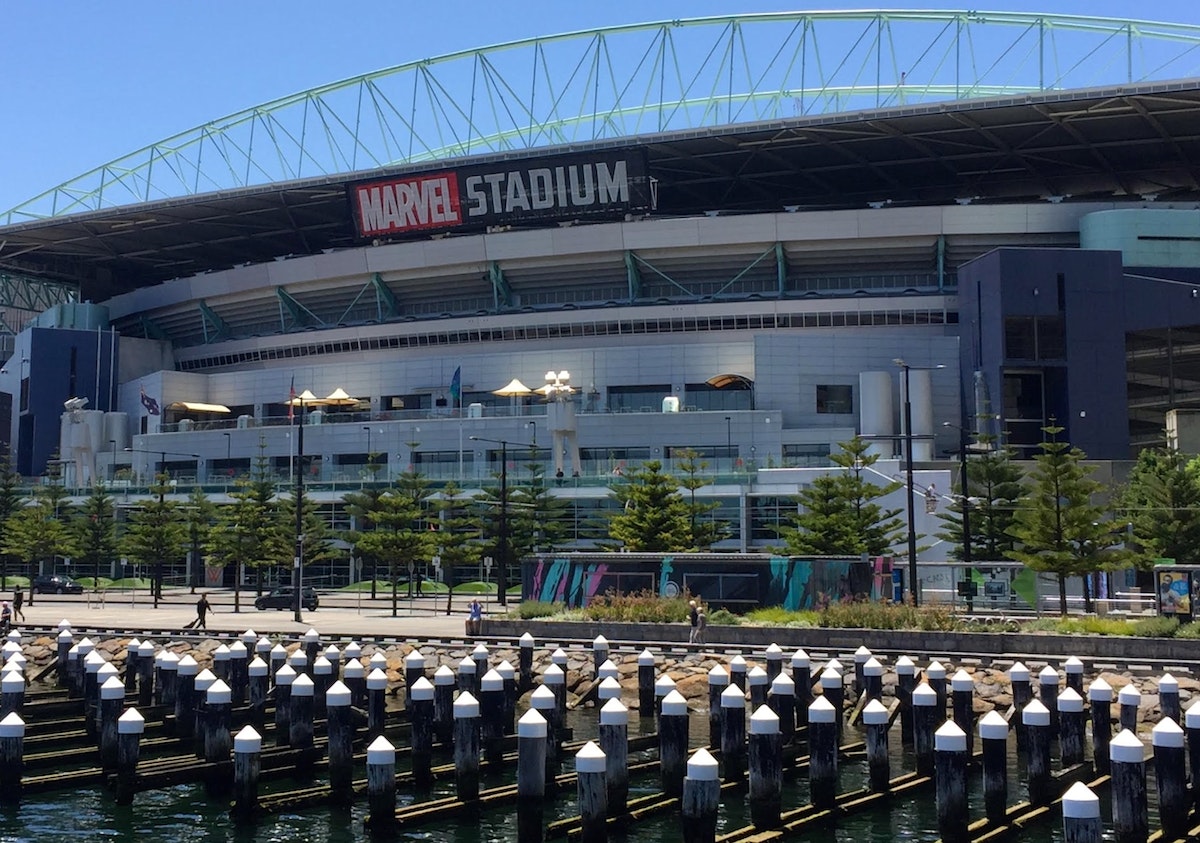