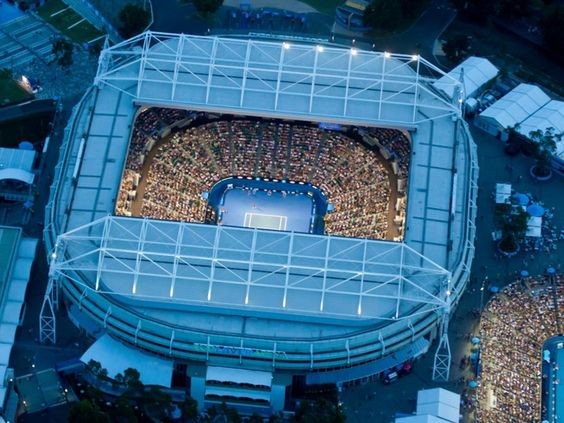 When the Australian summer starts heating up in January, it signifies not just sunshine, holidays, heat, beach and swimming but more importantly for more than 750,000 spectators it heralds the first Grand Slam Tennis Tournament of the year.
This world-class annual event is held at Melbourne Park, located in the Melbourne Sports and Entertainment Precinct just 1.5kms from Federation Square. First held in 1905, the Australian Open is now the largest annual sporting event in the Southern Hemisphere.
You need to stay close to where the action is and Melbourne Waterfront Apartments on the banks of the Yarra River is the perfect Melbourne accommodation location with prestigious 1,2 & 3 bedroom fully furnished apartments.

Melbourne Park, home to the Australian Open 14 – 27 January 2019, features Rod Laver Arena, Margaret Court Arena and Melbourne Arena all with retractable roofs and plexi-cushion surface for indoor playing during extreme heat or wet weather. With an additional 2 show and 35 outdoor courts, being a spectator at this extraordinary event is an amazing experience.
Watch and cheer your way through 14 days and nights of exceptional sporting prowess with the likes of Serena Williams, Rafael Nadal and Australia’s own Nick Kyrgios and Ash Barty just to name a few. You may even be lucky enough to see last year’s champions Roger Federer and Caroline Wozniacki defending their 2018 titles.

The top 100 men and top 100 women from all over the world will return to Melbourne to participate and hit their way through 40,000 tennis balls on the many courts of Melbourne Park to secure a place in the finals culminating in a final weekend of remarkable tennis. The total prize money pool is $60 million with the singles men’s and women’s champion awarded $4 million each.
You can watch the action of the world’s best players compete against each other live at Melbourne Park for as many sessions as you like. Special packages and ground passes are available on-line through Ticketek or at the gates.

It’s more than just tennis! On and off court Melbourne Park has something for everyone with concerts, live music, food and wine hospitality and a variety of the children’s activities. Kids ground passes are only $5 and enables you to soak up all the outdoor areas. There are three main entertainment areas;

• AO Live Stage, at Birrarung Marr opens daily from 3pm, use your AO 2019 ticket to enter via the AO Festival entrance and come and enjoy the fabulous live music each night, showcased by the amazing Melbourne skyline backdrop. Artists from across the Globe including some of Australia’s biggest music acts will perform nightly. Saturday 19 January sees the introduction of Coopers Saturday when the AO Live Stage will be open from 10am. Come for fantastic tennis and stay for the amazing music!!
• Grand Slam Oval is the best of Melbourne’s food & drink scene. In 2019 the area will be split into 4 distinct areas, showcasing the best of what Victoria has to offer: Beach, Vineyards, City & Chinatown. This fabulous area is open daily until end of play each day and hosts a line-up of Australian acts performing nightly.
• AO Ballpark is an onsite theme park with plenty of fun for kids of all ages. Featuring Disney brands, Lego and Nerf zones is the go to place for families.

Avoid the traffic madness when you choose to stay with us as transport to Melbourne Park is easy from Melbourne Waterfront Apartments, with choice of tram in the free tram zone, water taxi at our front door and it’s an easy 30 minute walk along the Yarra River with its bustling restaurants and cafes, a perfect way to enjoy great Melbourne hospitality on your way to the Australian Open. Another great way to absorb the AO magic is at Australian Open Live Site at Federation Square and it’s free.
Soak up the AO electric atmosphere, whether it’s a general admission ticket or reserved seating, you will most certainly observe the best tennis players on the planet battle it out to the end at this world class event.